CONGRATULATIONS! YOU HAVE STUMBLED INTO "THE SHALLOW ZONE." WATCH OUT FOR THE ROCKS. SOME OF THEM ARE SHARP.
If you're looking for a blog with meaningful content on the important issues of the day, you've come to the wrong place. This is the shallows, my friend. Nothing but shallowness as far as the eye can see. Let someone else make sense of things. I like it here.
Tweet to @WorldWideGreta

Not that there's any weight to it...
IN A WORLD FILLED WITH COMPLEX POLITICAL ISSUES, SOCIAL INEQUALITY, AND FINANCIAL UNCERTAINTY, I CONSIDER IT MY GIFT TO YOU, MY READER, TO OFFER THIS SHALLOW LITTLE HAVEN, WHERE NOTHING IS TOO SHALLOW, TOO INSIGNIFICANT, OR TOO RIDICULOUS TO JUSTIFY OUR ATTENTION. IN OTHER WORDS, IF IT'S NOT IMPORTANT....SO WHAT? NEITHER WAS MARILYN MONROE'S BRA SIZE. AND THAT STILL SELLS MAGAZINES, DOESN'T IT?
VIDEO OF THE MONTH

TEMPLE HEIGHTS: SEANCES BY THE SEA IN NORTHPORT, MAINE

If you're a regular reader of my other blog, Nocturne In G Major, you know that one of its major themes is the paranormal. Most recently, I've been writing a succession of posts on 19th century paranormal investigations, most of which were carried out by the British Society For Psychical Research (the SPR) shortly after its inception in 1888. There are few things I like better than a good, detailed account of a Victorian-era haunting. Even the mere mention of gas lamps, flickering candlelight, and glowing figures in filmy grey gowns is enough to set my heart a flutterin'. But as much as I love to read and write about such things, I love taking part in them even more. But how is that possible, you ask? Well, settle down, and I'll tell you...in two simple words. Ready? Temple Heights. 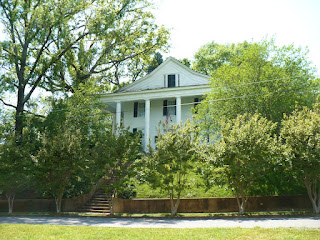 TEMPLE HEIGHTS: MECCA FOR SPIRITUALISTS AND THE SIMPLY CURIOUS FOR OVER A CENTURY

I suppose the best way to describe Temple Heights is as a "spiritualist retreat", which it is, technically, although you don't have to be a spiritualist to go there. In fact, for the past five years that I have been making regular summer pilgrimages to Northport, Maine, where Temple Heights is located, I'd have to say that the majority of people I've met there are men and women who are simply curious to find out what goes on at a place like Temple Heights. The short answer? A lot. From the day it opens its doors for the summer (this year that day will be Friday, June 16) until they close for the season in the first week of September, visitors can partake of everything from a group seance (or message circle, as they're called by the regulars) and/or a private reading to classes on such diverse topics as remote viewing, spirit photography, and spiritual healing, as well as church services in the separate, and equally old church which is also located on the property. 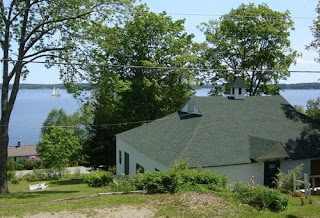 But just because Temple Heights is a place dedicated to the pursuit of spiritual knowledge doesn't mean it's all somber faces and hushed voices. Spiritual seekers have their fun-loving side, too. For the price of $45 (cash only; they don't take plastic at Temple Heights), you can rent an absolutely adorable, pristine little room in the main building that overlooks the ocean and which you can use as a base to explore not only the section of beach that is part of the property, but the nearby towns of Belfast (consummate Maine coastal town with some of the best bars and restaurants in the area) and Camden (consummate Maine tourist trap also with some of the best bars and restaurants in the area) as well. And if you really want to make the most of your time at Temple Heights, you definitely have to visit Dos Amigos, the unapologetically cheesy Mexican restaurant owned and staffed by a very nice family with roots in Eucador, which marks the turn off from Route 1 onto the windy, summer cottage-lined road leading to Temple Heights. In fact, I usually make a point of stopping at Dos Amigos first to fortify myself with a plate of chicken mole (the best on the coast of Maine), a Margarita, and a shot of Grand Mariner before checking into my room. Invariably, half of the people I see whilst there, I see later on at Temple Heights. Clearly, I'm not the only one who considers a visit to Dos Amigo an important pre-Temple Heights ritual. 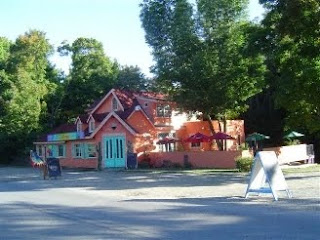 DOS AMIGOS IN NORTHPORT, MAINE: BEST CHICKEN MOLE ON THE MAINE COAST (AND THE MARGARITAS AREN'T BAD, EITHER)

So, by now, you're probably thinking, okay, it all sounds fun enough, but what about the paranormal part? As in...have I ever actually seen anything that could be classified as such during any of my stays at Temple Heights? Good question. But the answer is a little complicated. I mean, sure, I've had my share of experiences whilst there. The first time I ever spent a night at Temple Heights, I woke during the night to the unmistakable sensation of arms around my waist. The sensation was so real that, for a second, I actually wondered who the hell had climbed into bed with me. However, on turning around to look, there was no one there...which sent me into such a panic that I groped for the light and then went outside for some fresh air to calm my nerves. Then I remembered the private reading I'd had earlier that evening with one of the many mediums who offer their services (for only a small stipend) at Temple Heights every summer. During the reading, the medium had informed me that a spirit was present and wished to give me a message. She described the spirit, telling me that it was up to me to identify it, because, otherwise, it would just be her telling me that it was so-and-so, and that would hardly stand as proof of anything, would it? In other words, she explained, "given your age, it would be reasonable for any medium to assume that you have a grandmother in spirit. So, for me to say, 'Your grandmother's spirit is here' just sounds like I'm making that assumption. But if my description of a spirit makes you say, 'That sounds like my grandmother', then the message I give you is more likely to mean something.' Do you understand?"

I had to admit that it made sense. And so did the message that the medium gave me afterward. But just to be sure, after the reading, I asked my grandmother (silently, of course) to give me further proof that she had actually come through at the reading. Some sign that only I would understand. Just some little thing that, when it happened, I would connect immediately with her. And I had left it at that and gone to bed. And then...well...the sensation of arms wrapped around me in my dark room. The interesting thing is, when I was a kid, I lived with my grandparents and often slept in my grandmother's bed. And very often, she would wrap her arms around my waist as we slept. It's one of the things that I remember most fondly about my childhood. In the context of what I had asked from my grandmother's alleged spirit, it was a perfect response. To this day, I am convinced it was my grandmother's spirit who slipped into my bed at Temple Heights that night. 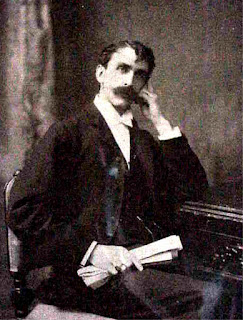 HARRISON D. BARRETT: FOUNDER OF THE SPIRITUALIST CHURCH IN MAINE

There have been other interesting occurrences at Temple Heights which have cemented my belief in an afterlife as well. There was the time when, during a seance, I saw a spirit trumpet vibrate and rise a few inches off the floor, the occasion when a medium asked me point blank about a personal situation that she had no business knowing about and which had been on my mind all day, and the night that I sat in on a table tipping session and was astounded when the table began dancing and rocking, seemingly of its own volition and those of sitting around it had to grip its edges with all our strength to keep it from scuttling across the floor. Yes, I know, cases can be made for fraudulence in connection with all of these things. But the way I see it is, that when it comes to the paranormal, the burden of proof isn't on the person who claims to have had the experiences, it's on the person who wants the proof...and good luck proving a negative. The last thing I'm going to waste time doing is trying to prove what I believe to anyone else. Maybe it really happened, maybe it didn't, but, bottom line, I experienced something...and that's all that matters to me. You want to meet me at Dos Amigos for a Margarita, I'll tell you all about it. Otherwise, feel free to go spew your skepticism elsewhere...perhaps in your own blog dedicated to the purpose. 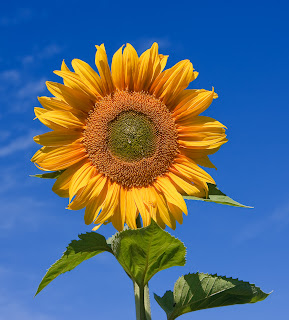 THE SUNFLOWER: THE THE SYMBOL OF SPIRITUALISM, AN IMAGE OF WHICH CAN BE FOUND IN EVERY ROOM AT TEMPLE HEIGHTS

Skeptics or no, I'll be going to Temple Heights this Saturday, to attend a seance and spend the night. I've booked the "angel room", so-called because of the picture that hangs on the wall opposite the bed. It's a copy of a 19th century lithograph of a dying woman, her husband kneeling in anguish at her bedside, with a spirit (or angel) rising up out of her body in a mass of shiny white glory. The first time I stayed in the room and saw the picture, I thought it was macabre and even a little bit horrifying. Now, I just think, oh, well, typical Temple Heights. Just one more fascinating element of a place where the flesh and the spirit are all intertwined, where those who have recently imbibed Margaritas and scarfed down chicken mole can enjoy a seance by the ocean at night, and splash in the ocean by day, and, maybe...just maybe...come away believing in something that they didn't believe in before.

“It is only shallow people who do not judge by appearances. The true mystery of the world is the visible, not the invisible.”

Hard as it is to believe, this isn't the only blog filled with shallow, yet (I hope) delightfully interesting content. If you want to waste even more time, take a gander at some of these other blogs that I've stumbled across in my aimless online treks.

Radioactive ice cream, photos of politicians eating ice cream, and a whole lot more ice cream-related content to fill your empty (metaphorical) cone. Definitely worth a lick...uh...look. You might lose a little of your precious time, but at least you won't gain any weight.

Really bad food. Really ugly food. From the worst cookbooks ever compiled by people who consider catsup an all-purpose garnish and creamed corn a delightful necessity. This blog proves that "mush!" isn't just something dog-sledders yell on the Iditarod.

Horses wearing blue jeans. Buttered hamsters wrapped in tin foil. Why? Because looking at stupid animal pictures is better than reading about cannibal cops or Kim Kardashian's baby bump. And because hedgehogs in latte cups just might be the chicken soup that will soothe your shallow soul.

Sure, you could just go to Wal-Mart and see them for yourself. But then you'd have to stop drinking that beer and put your pants back on. And who the hell wants to do that?